The season of the ages, the oldest contestant of all was able to endure the struggle and play the game to her best of her ability. Susana Strong played a respectable game, which gave her the win in a 4-3 vote against Elisa River. 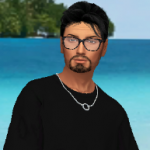